>A Wet Chamois Leather Flogger Is Born – Part Four, Continuing With The Handle

>To see the other posts in this series follow the links below.

A Wet Chamois Leather Flogger Is Born – Part One

A Wet Chamois Leather Flogger Is Born – Part two, The Handle Base And Marking Out the Chamois

A Wet Chamois Leather Flogger Is Born – Part Three, Cutting The Chamois And Attaching It To The Handle

The top of the handle

A piece of the “off cut” chamois bigger than the diameter of the handle was cut and a hole punched in the middle of it with a leather workers hole punch. The metal loop was then removed from the handle and a guide hole was drilled into the center of the top of the handle, strong waterproof glue was put into the guide hole, to create a waterproof seal to protect the wood. the loop was then put through the hole in the piece of chamois and screwed full length into the guide hole. The chamois was not glued at this time and was held up out of the way of other work with an elastic band around the metal loop.

Now that the chamois is attached to the handle, the rest of the handle needs lining to make the handle equally thick along it’s entire length.

The cloth banding as seen above was purchased in a camping equipment shop. I have been camping many times and have never used this stuff, I wonder what it is supposed to be for? Any way, to make it the same thickness as the chamois already attached to the handle and to brake the thread and make it more flexible, one side of the cloth banding was sanded down using a belt sander. The result of this can be seen in the photo on the above (bottom). 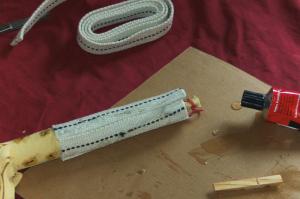 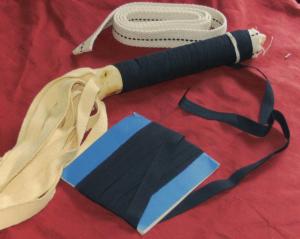 Four strips of the cloth where then glued along along the length of the handle (sanded side to the wood) from the chamois to the end, luckily four strips fitted exactly round the circle of the handle and non had to be cut lengthwise (see photo above top). The glue was used very thickly for this as much of it was absorbed by the cloth. In the photo above bottom you can see how cloth banding, left over from my last project, was wrapped, very tightly, around the handle and secured with an elastic band to hold the thicker cloth banding hard against the wood of the handle, while the clue sets. The securing banding was left on for about six hours and then removed, the flogger was then left over night for the glue to set properly before work continues. 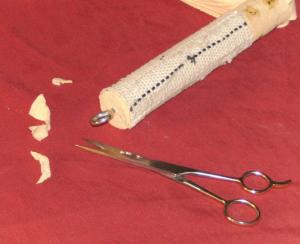 The handle covering
In a local shop I found a table or place mat, that is made of woven synthetic fibers and is as easy to grip when wet as it it is when dry. Being a shiny bronze colour it complimented the colour of the chamois tails. So this is what is going to be used as the main handle covering.

As can be seen in the photo (above top), a piece of the table mat was cut to the same length as the wood of the handle and wide enough to be wrapped around the entire handle with an overlap of 1.25cm. No glue was used on the covering as it would seep through the weave and become unsightly. The piece of mat was then wrapped around the handle as tightly as possible and temporarily held in place with six elastic bands. Two small blobs of glue where then put at either end of the mat, where it overlaps, and two small pins where driven through all the layers and into the wood, taking the glue with it to seal the place where they go into the wood, to protect it from water (photo above bottom). These pins will not be visible when the flogger is finished, they where hammered all the way in after the photo was taken.

And that is where we will have to leave the project this week.

Posted in Toys are born. Bookmark the permalink.