>What to Call Spanking – A Musing

>I thought that I would ease back into blogging with a bit of a musing. I have not done much musing on this blog, perhaps I should do more, perhaps not. The stats will tell me one way or the other.

What to call play

Spanking – This is the commonly excepted word ” I am a spanko, I am into adult spanking”. The thing about this label is that it does tend to bring on mental images of OTK spanking and lighter weight play. When talking people outside of the spanko world, even other kinksters, I am very conscious of the fact that the terms “Spanking” and “Spanko” do tend to have very childish undertones too them and do not convey how seriously we take adult spanking play. This is a very good term for spankos to use with one another because we have experienced the full meaning behind the words but with the rest of the world I’m not convinced anyone will take us seriously if we continually describe our play as spanking. [picture is from Punished Brats and was found at Amber Pixie Wells’ Spanking Journal]

Thrashing – I love being threatened with this word, “Your going to get such a thrashing boy!”, “expect to be thrashed for your actions”, phrases like these send a chill up my spine,they are for me the ultimate in thrilling promises. Some people may find this term a bit too strong for them though and it does suggest the stronger end of the play leaving out the fun and friendly spankings. After all you cannot describe an OTK spanking as a thrashing, it just does not gel. “Thrashing” really is the flip side of “Spanking”, great for describing a certain aspect of play but not much good for describing the whole spectrum of the way that people play. As a “by the way” I’m not 100% sure but I think that this word derives from “Threshing”, the term for separating the grain from the stalk of certain agricultural crops, which before the advent of machinery was done by beating the crop on the floor of a barn. [Picture from Pain4Fem] 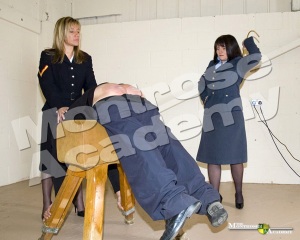 Beating – I love this word when actually playing, there is nothing like the feeling that your getting a good beating, when your under the lash of a competent and harsh Lady top. Out side of play this word has too many negative associations “Wife beater”, “Beaten to a pulp”, “Beaten and abused”, the list could go on for a very long time. Personally I feel that this word is best kept as a play word, used in play by people who know there is no negative effects to the way that it is being used between them. Even with other spankos I tend to avoid using this word to describe a play scene, it is definitely a big no no when talking to non spankos. [Picture from Montrose Academy] 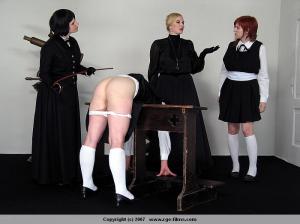 CP Role Play – an excellent term to use when describing what we do to vanillas and people from other kinks. Initials always sound serious and technical. It is a pity that we cannot use CPR instead of having words at the end but CPR is of coarse already used for “Cardiopulmonary resuscitation” and confusion must be avoided. This term has a good adult feel to it and helps reflect that we are only interested in spanking amongst consenting adults and takes us away from being associated with the spanking of children, something that I am strongly against. I actually do not feel comfortable using this term with another spanko but when talking to any one else I do like to call myself a CP Role Player, it is descriptive and adult sounding. [Picture from RGE Films ]

Whupping – This is my favorite, a term I believe originates from the USA. It has a nice round friendly feel to it when it is spoken and covers the full range of play from soft to harsh, without foul or favour. “She gave me a good whupping”, “I whupped her butt” it always sounds good, it is IMHO a “whup ass” word. [Picture from Good Spanking]

Have I left anything out?

Posted in Musing, philosophy. Bookmark the permalink.
← >Two New Blog Lists – A Couple Of Things For The Side Bar – And A Couple Of LOL Cats
>Women Who Should Be Spankers – Siouxie Sioux →