It is a long time since I have done a “make”, perhaps I should do another one soon. This is the conclusion to making a toy that I have been most satisfied with. Not only does it work well and look great it is also something that I have never seen for sale and so is a special item to have in the toy box. Original post HERE.

A Wet Chamois Leather Flogger Is Born – Part One

A Wet Chamois Leather Flogger Is Born – Part two, The Handle Base And Marking Out the Chamois

A Wet Chamois Leather Flogger Is Born – Part Three, Cutting The Chamois And Attaching It To The Handle

A Wet Chamois Leather Flogger Is Born – Part Four, Continuing With The Handle

A Wet Chamois Leather Flogger Is Born – Part Five, Finishing The Handle And The Wetting/Drying Stand

Re nailing the handle

Anyone who read the last post in this series will remember that I was not too happy with the brass coloured nails on the handle (first photo). two of these where repositioned and a second row was put in for visual effect. As can be seen in the second photo, it is a big improvement.

the new pride and joy is finished and a nice clean bucket has been found for its first introduction to water. I did try a couple of swings at my back with the flogger in its ‘never been in water’ state, it was incredibly lightweight, I could hardly feel it, in this state it may be a good toy for those who are into psychological play rather than real pain play. 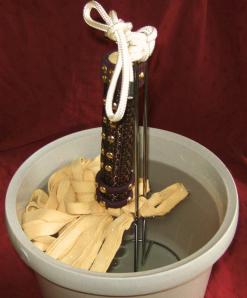 The bucket was filled to the correct level with tap water, the flogger was tied into its wetting position and the stand, with the flogger attached, was lowered into the bucket. The tails where not prodded and poked into the water but allowed to absorb the water in their own time. The flogger took about an hour and a half to soak fully.

The first testing
The first testing happened in the bath room. Firstly the flogger was used fully wet over my shoulders, onto my back. the impacts where a very heavy thump and had the unusual effect of leaving a cold area where the tails had landed, as opposed to the heating effect of a dry toy. After about two dozen strokes the water was running down my back and down the tiles of the bath room, used in this state this flogger does spray a lot of water around but the impact sensation was good and very different from a dry toy. The tails of the flogger did tend to tangle a little.
The tails of the flogger where then squeezed out as dry as they could be and more strokes where applied. In this state the flogger is still very thumpy although not as much as before and has a strange after effect of leaving a little stingy sensation, where it has landed, that happens a couple of seconds after impact. The area of impact is still cooled by the water. The tails did not tangle when used in this state. next the flogger was left to dry out for a couple of hours until it was in a state of not really dry or wet but more slightly damp. A few strokes where applied in this state and it was found to be surprisingly like a dry leather flogger complete with heating effect.

After use the tails had, worryingly, stretched and so where trimmed to an even length that fitted the stand. The flogger was then left to stand and dry properly for two days. 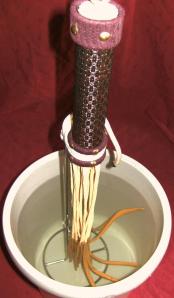 Chamois leather tends to become stiff after it has been wet and then dried, so the flogger was first put into the water in its drying position, on the stand, until the ends of the tails had become flexible and was then re tied into its normal position for soaking. this time the flogger was fully saturated with water after less than ten minutes. The same testing sequence as before was repeated and the impact and after effects found to be the same as before. There was no problems with the tails tangling this time.

when the flogger was placed on the stand to dry it was found that the tails had not stretched this time, that, thankfully, seems to be a first time use only event.

Conclusion – This is a very effective toy that can produce two types of thumpy cold impact, that are different from a dry flogger and one effect that is similar to a dry leather flogger, depending on how wet it is. I am very happy with it.

Free – the wood for the handle and the cord which came from an old drawstring bag.

For just under 17 Euros I have a toy, that try as I might, I have not been able to find any where for sale, that has a unique and special impact effect. The toy looks nice, I particularly like the brown, brass, fawn colour combination and it has its own stand. So in conclusion I am a very happy bunny. All I need now is a hot summers day, a beautiful ice cold stream several miles from prying eyes and a woman with a strong arm and an accurate swing.

P.S. If anyone else has ever made anything similar I would be very interested in hearing about it.

Posted in Hiatus Repost, Toys are born. Bookmark the permalink.
← >St. Trinian’s Cartoons And A Little About Their Creator Ronald Searle – A Hiatus Repost
>Plant Clips, Testing A Pervertable – A Hiatus repost →