THE SOUND OF SILENT SPANKING

In the following link, you will find a post I published a few days ago

In it, I featured a vintage spanking GIF, that came from the time of silent cinema. I thought that I would go looking for more like this. This is what I found, enjoy.

I think that the next two would have been from the 1950s, but were for sale for home cinema use, which at that time would have meant that they were silent.

2021 marks the 700rth anniversary of the death of Dante ( AKA Durante di Alighiero degli Alighier – and if you think that I had to copy and paste that name, you would be right) who is most famous for his extended poem The Divine Comedy. In this work Dante is given guided tours of hell, purgatory and paradise. The most interesting of these three is the first part, usually known as Dante’s Inferno, where he is guided through the nine levels of hell, with different levels of punishment for the sinners cast down there based on the sin that they have committed. I thought that it might be fun to imagine what Dante might have witnessed if he had been given a tour of The Spanking Inferno

Level One – Of Spanking By The Hand

Level Five – The Belt From Beelzebub

Level Six – The Torture Of The Tawse

Level Seven – For The Countlessly Caned

The worse punishment level, reserved for those that have committed the most heinous of sins. Such as eating crunchy snacks in the cinema, or stealing my favourite parking space.

Or are there any alternative levels that you would like to show Dante?

BIRCHING IN THE BAD OLD DAYS – AND A FUNNY

How A Birching Was Carried Out Way Back When

I’m not sure when this practice was stopped but The Isle Of man was, I believe, the last authority in Europe to use corporal punishment as a judicial punishment, in the form of birching. This is an actual news report where a police officer explains how the punishment was conducted.

And I Just Thought That This Was Funny

have a great weekend everybody

All Chained Up And Nowhere To Go

I am away from the computer right now and may not be able to answer any comments that are left here.

CELEBRATING THE 75TH ANNIVERSARY OF VE DAY WITH PIN-UPS

And this is definitely a modern one

May all wars end 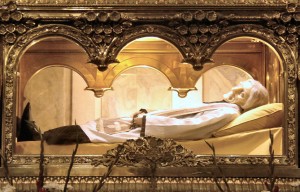 And that really is him. His face is covered by a wax mask but that is his body, not a representation.

How I found out about him

I was having a little history walk around a French town and went into a church to have a look around.  As in most Catholic, French churches, there were statues of saints around the place and the inscription under one statue said St. Cure D’ Ars. Great! Just what every Christian spankee needs, a saint that cures arses 🙂

Of course St. Cure D’ Ars does not mean what it sounds like in English. It does mean St. Priest (or curate) of the town of Ars (yes there really is a French town called Ars). His real name was John Vianney and he is the patron saint of priests. After the revolution he helped save French Catholicism and founded a home for girls with Catherine Lassagne and Benedicta Lardet (and no I did not make up those names). And he spent most of his life in the town of Ars.

I’m not a Christian myself but any Christian spankee that finds their bruised and battered rear end throbbing away, on a hard pew, one Sunday morning could consider saying a prayer to this saint. Even though he is not a real spanko saint, who knows, perhaps he can “Cure The Arse” 🙂

If you like these images or any others in this blog, you can vote for them for the monthly, Top Of The Click Pops by clicking or right clicking on them. The top five are posted at or near the beginning of every month, for the previous months result.